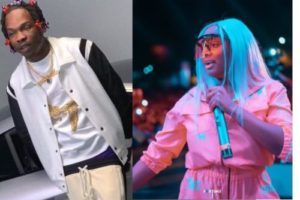 The effect of Naira Marley’s music and his kind of life has become so contagious that even his fellow music industry colleagues are being influenced by them.

After Wizkid declared himself a “Marlian” last week, the latest music celebrity to have now declared herself as part of a movement that holds itself really strong in the music industry and outside of it is billionaire Disc Jockey; DJ Cuppy. This happened at Zlatan’s recently held successful “Zanku To The World (ZTTW)” concert in Abuja. The “Gelato” singer and Naira Marley met backstage, hugged as they expressed admiration for each other.

It was in that meeting DJ Cuppy who obviously was looking shy, expressed to Naira Marley that she is a Marlian.

Watch the moment below:

Dj Cuppy declared herself a Marlian after meeting Naira Marley

The post DJ Cuppy Looks Shy As She Decalres To Naira marley She Is A Marlian || Watch Video appeared first on tooXclusive.